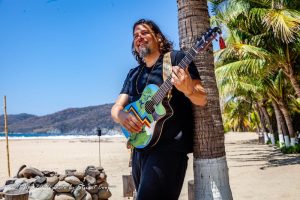 He is best known for his one-man orchestra show; simultaneously playing, singing and making the instrument sounds with his mouth —without the use of a loop pedal. Lipbone compliments his uncanny vocal range by incorporating American Roots, Blues and Jazz with world influences including Indian, Middle Eastern, African and Latin styles.

Lipbone is originally from Eastern North Carolina. He moved to New York City in 1990 where he began writing, performing and producing songs and music in the dynamic arts scene of the East Village.

His illustrious career began in the subways of New York City and that same determination has carried him to audiences worldwide. His traveling spirit remains fueled by the desire to experience the perspectives of others and to collaborate. He has been performing an average of over 200 shows a year since 2006. Even during the global pandemic, Lipbone broadcast 165 hour-long music live-streams.

During his non-linear artistic journey, Lipbone has served as a producer for The Museum of Sound Recording in Brooklyn and is co-founder of the 67 year performance project, “LOVeSPHERE.”

In 2003 he studied with Bansuri (flute) master G.S. Sachdev in San Francisco. From 2004 to 2005, Lipbone lived in India, where he studied classical music with Dr. V. Balaji. There, in Varanasi, he became heavily influenced by the beauty of Indian music, people and culture.

In 2007 Lipbone was hired by the Bill T. Jones/ Arnie Zane Dance Company as musician and composer. The work, “Chapel/Chapter,” won the 2007 Bessie Award for best collaboration.

In 2014 Lipbone began touring the US and Canada in his solar van, “The Beautiful Flying Machine.” He performs regularly in Europe, Central America, and South America. On his “Backpack And A Guitar” tours, he travels slowly and soaks in the culture of each place he visits, “Making music, and friends.”

Lipbone is currently artist-in-residence at Oak Grove Retreat (Non-Profit) in Tarboro, NC. Programs are focused on sustainable lifestyle, music, arts and holistic healing. From his small homestead at Oak Grove Farm, he broadcasts 2 weekly live-streams, leads musical meditations in the historic chapel, and curates music/arts programming for the non-profit retreat center. Here, he is afforded the time and space to explore his true passion, composition, and the art of the song.