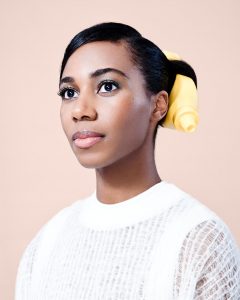 “I don’t make music for myself,” says Santigold, matter-of-factly. “I pay a lot of attention to that—making music that’s liked by more people than just myself.” In a scene driven by bravado, few musicians would ruminate on the Zen-like balance behind creating truly gratifying art. But exploring that intersection between integrity and intrigue has always been central to this idiosyncratic musician’s appeal. That, in turn, has culminated in her latest release, 99¢ (out January 22nd), an often-playful satire on the singer’s “brand.”

“The 99¢ album cover features me shrink-wrapped among a cluttered mess of things—my life in a bag,” she explains. “It is about how everything is a packaged product for sale: how we package ourselves, our lives, our relationships.”

We first heard Santigold’s outspoken, unmistakable voice in 2008 on her vibrant self-titled debut featuring the singles “L.E.S. Artistes” and “Creator,” both takedowns about authenticity that won praises from Rolling Stone and Pitchfork alike. Her follow-up, the darker Master of My Make-Believe—its centerpiece, the post-punk anthem “Disparate Youth”—hit both Billboard’s Dance/Electronic and Top 200 charts upon its release. Where to go from there?

“When I got off the Master of My Make-Believe tour, I got home and said, ‘I want to do something completely different,”’ she says. So she created a post-apocalyptic makeup line for Smashbox, designed head-tripping socks for Stance, and popped-up in acting gigs on The Office and Adult Swim’s NTSF:SD:SUV::. “I think if I hadn’t done all that,” she says, “I wouldn’t have been prepared to do more music.”

She also spent time with her new son, who’s responsible for much of 99¢’s markedly sunnier disposition. “He kinda forces me to go with the flow. That’s completely, absolutely the opposite of my natural tendency,” she says, laughing. That new perspective is evident right from the album’s optimistic, lilting opening track, “Can’t Get Enough of Myself.” “I was very careful to write lyrics that were bright and worked really hard on that,” adds Santigold. “It sometimes doesn’t come easy to me, because my sense of humor can get dark.”

It took roughly eight months to manifest her new vision, with assists from a mix of collaborators with poppier visions such as producers Patrick Berger (Robyn, Icona Pop) and John Hill (Florence and the Machine, Charlie XCX), alongside eclectic talents known more for globe-trotting sounds such as Vampire Weekend’s Rostam Batmanglij and TV on the Radio’s Dave Sitek. She went into the studio with them intending to make a fun record. “My last record had a seriousness to it,” she says. “This time around, it’s more playful—but still a commentary.”

99¢ came together primarily in New York City and Los Angeles, with a stint in Jamaica, where Santigold likes to do her lyrical heavy-lifting. “I have a place there in a tropical forest, with a balcony overlooking endless trees, and in the horizon, the ocean,” she says. “You get up at seven in the morning, and the lyrics just pour out.” Her vantage may have shifted, but 99¢ remains grounded in her aural anchors: bold rhythms, glitched-out melodies, and morphing global sounds.

Buoyancy was important to her, but so was capturing a depth of sounds and emotions. As such, life-affirming exhortations like the African-beatific “Banshee” and the new-wave “Rendezvous Girl” coexist alongside ethereal, existential tracks such as “Chasing Shadows,” “Before the Fire” (co-written with indie-soul artist Sam Dew), and “Walking in a Circle.” The latter “was about how I sometimes feel as an artist in this climate. Feeling stuck,” she says. “It’s about this struggle to find a fun place.”

Today, any of her dissents veer toward the contemplative. “I wanted to write some songs that felt very personal,” she says. “Before Santigold, in my other band, I used to write songs like journal entries. And I tried to write a couple of songs on this record where it was really about me and my experience.” Though, in true Santigold form, she balances the introspective moments with humorous ones in songs like “Who Be Loving Me,” a lighthearted boast about fan adoration, produced by Zeds Dead and featuring ILoveMakonnen.

“You could go around being annoyed all the time, or you can go, ‘This is crazy and actually funny.’ Then you can play around with it, and make great art,” she says. “This album has required me to be more open, less of a perfectionist.” Ironically, that’s made the prismatic 99¢ her most ambitious album to date. “I realize that my work is a collage,” she says. “And I can pretty much take that anywhere.”