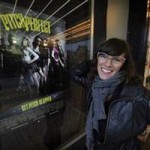 Music Supervisor SARAH WEBSTER was born in England, raised in Vancouver BC and currently resides in Los Angeles. She has worked on over fifty films and television series since 2003. Most notably the recent smash hit musical comedy from Universal Pictures, Pitch Perfect.

After 14 weeks at #1 on the Billboard Top Soundtrack chart, the album was not only the best selling soundtrack in the US in 2013 but went on to go Platinum and win Best Soundtrack at the American Music Awards.

Sarah’s focus shifted to film when she moved back to Vancouver to oversee the film music department for Canada’s leading & largest music management & booking agency, soon after becoming VP of Music Supervision for S.L. Feldman & Associates.