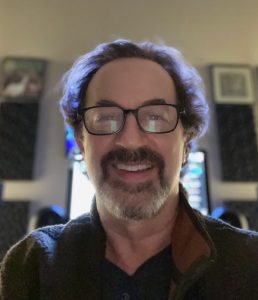 Scot Byrd is a singer-songwriter, composer and music producer. A native Californian now living in Austin, Texas, Scot is currently producing and releasing reimagined covers and original singles as a solo artist, with an eye and ear toward sync licensing. Characterized by soaring melodies, harmonic density, and grooving rhythms, Scot’s music features a diverse palette of range and influences. His passion for working remotely with collaborators from around the world is reflected in his latest project – the upcoming single release of his original song “Something New” features artists based in Nigeria, Nashville, San Antonio, and San José, California.

Scot combines an actor’s approach to singing with a screenwriter’s insight into story. His baritone/second tenor voice balances power with sensitivity, bringing to mind such iconic singers as Roy Orbison, Chris Isaak, Paul Simon, and Brian Wilson. As a producer, Scot is fluent in pop, rock, soul/R&B, jazz, Americana, and world music.

Growing up, Scot’s family moved frequently throughout the US, giving him a deep appreciation for a variety of musical styles. With early voice training, Scot was a featured solo vocalist at Red Rocks Amphitheater at the age of 12. Later, he toured Europe as a cultural ambassador with the American Youth Symphonic Band and Chorus, and went on to a voice scholarship in college. He earned a BFA in Acting from CalArts and an MFA in Screenwriting from UCLA. At CalArts, Scot’s interest in world music was sparked by the institute’s African Music Ensemble.

Scot’s background includes work as an on-air disc jockey, and in-house publicist for an Oscar-winning Hollywood film and commercial production facility, Rhythm & Hues Studios. On the literary side, Scot’s screenplay projects include a feature-length adaptation for David Crosby, a proposed TV series with Buzz Aldrin, and a proposed Frank Lloyd Wright limited series.

For two decades, Scot has produced originals and covers in his home recording studios, honing the craft of music production along the way. He has also produced music for short films and music videos.