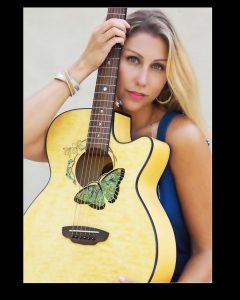 Singing and writing songs since a young girl, Stefanie Johnson hails from the Lehigh Valley region of Pennsylvania, once home to some of the country’s largest steel manufacturing. Her professional musical experience is varied and significant: performing at Bethlehem’s popular Musikfest, one of the nation’s largest music festivals, and beyond. Stefanie has appeared on local television stations such as WLVT’s Steel Sessions, WFMZ’s Music Monday, and Service Electric’s Holiday Concert Series as well as The Mike Zambelli Show. In addition to the local scene, Stefanie has performed at Nashville’s legendary Bluebird Cafe and 12th & Porter, and then on to perform at the Rock and Roll of Fame in Cleveland, Ohio.

In 2015, Stefanie began recording her album with co-writer/producer Brian J. Anthony who immediately embraced her vision. Brian helped create a sonic landscape by mixing bits of rock, pop and country while not losing the intensity of her voice or deep personal reflection in her lyrics. The result of these tracks gained the attention of some of the area’s best-known musicians who all jumped at the opportunity to be part of this project. She released her self-titled debut album, Stefanie, through England’s Escape Music label in February of 2017.

To describe her voice, Stefanie has a bold melodic presence, both strong and smooth. Her style ranges from a soaring pop artist to rock singer with a slight country timbre as well. Similarly, her music and songwriting style traverse those same motifs. Stefanie is currently working on a new album with co-writer and producer Brian Anthony. This album will be slightly more blues and country driven with a roots rock feel.