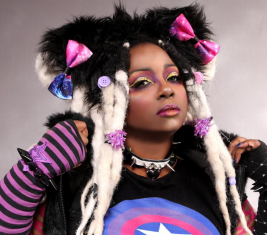 ThaGataNegrra is an alternative hip-hop artist who specializes in a funky start-stop delivery; her rhyme arsenal runs the gamut from danceable ear candy to mind-searing aggression. Her distinct flow, catgirl persona, and kawaii aesthetic not only earned GATA the designation of “NJ’s real-life Catwoman” by Indie Flava Magazine, but helped her make her own pawprint on the underground hip-hop scene and the con circuit. Armed with influences ranging from Golden Era hip-hop and punk to dance and new wave, the Newark Arts High School alumnus pounced through a few groups before landing on her feet and striking out on her own.

Lyric aficionados appreciate the range of life experiences in her songs; she vents them in an unexpectedly aggressive fashion that flies full in the face of her appearance. The Diosa AniManga/PunkRhyma™ writes from her gut, roaring her truth onto two full length projects for 3 Miles Entertainment.

GATA is a proud geek and otaku, and her performances highlight this by featuring cosplay and her own take on decora kei-meets- Afrofuturism style. Her “…in-your-face” “kawaii-hop” sound was included in the second and third seasons of the groundbreaking hit Hulu show “East Los High”. 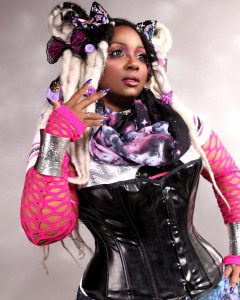