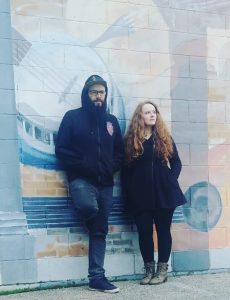 The Castros are Sara and Marco Castro, a husband & wife indie folk/rock duo hailing from Westerville/Columbus OH. They’ve been making waves regionally and internationally with their heartfelt folky tunes, while becoming a staple in their growing Columbus music scene.

Their music fluctuates between haunting, cinematic and organic emotional pieces like “My Dear” or “Forgive Me”, and catchy, happy and upbeat tunes like “Pumpkin Pie” and “Secret Song”.
Marco was born and raised in Costa Rica, where he listened to everything from local rock, punk and ska to salsa, reggae and everything in between; Sara grew up in Newark, Ohio listening to classic rock, folk music, and more. It’s no wonder how this collapse of influences and cultural conversation drives them to experiment and bend their sound into a style of their own. They even have songs in Spanglish! and were dubbed as “The Oh Hellos meet boygenius” by the Kentucky Music Preview.

The Castros aim to craft their songs with honesty and passion, hoping they will be meaningful for anybody that will take the time to listen.

That’s in essence what The Castros are: a musical treat for the heart ♥

–
Accolades
They were selected to represent the city of Columbus on its Bicentennial and also were named Best Local Band at the (614) Mag ColumBEST awards. They’ve done several tours throughout the Midwest, East Coast and southern regions of the USA, Costa Rica, and an extensive European Tour that went through Sweden, Denmark and Germany. 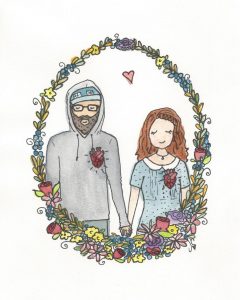 “Led by vocalist Sara Castro’s cooling croon, “My Dear” starts out as a quiet, plaintive ballad that quickly evolves into a percussive, slinky Civil Wars-esque groove. Perfect for the season” – Will Hodge, NOISETRADE