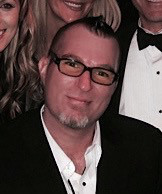 Please join us on September 25, at 5PM BST/9AM Pacific/Noon PM Eastern, with TV/Film Producer/Music Supervisor Jason Rothberg for what promises to be a fantastic Supervisor Listening Session.