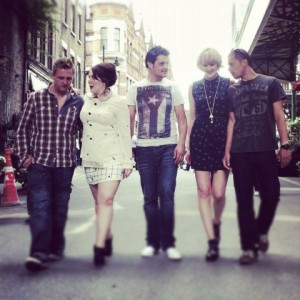 Unsung Lilly are a fantastic band out of the UK (http://unsunglillyofficial.com) that have gotten a lot of traction of late in the UK (including playing in front of a crowd of more than 300,000 at the 2011 Royal Wedding celebrations in Hyde Park and some great buzz here in the US.

As a result of the success of the Hyde Park performance, the band made the decision to start producing original material and the inception of Unsung Lilly’s exciting new music direction was complete following the addition of Frankie as joint lead singer.

Recently, I had the opportunity to have a chat with Unsung Lilly’s singers/co-writers Sera Golding and Frankie Young about their band, their music and plans for the sync market.

MF: Tell us about yourselves and how you came together as a team and a band.

Sera Golding: Well, myself and the rest of the boys in the band had been playing together for years, working as musicians for other artistes etc. We had a great chemistry so decided to start writing together.  We then found Frankie and realized that not only did our voices work really well together, but the two of us found writing together came very naturally. So Unsung Lilly started from there, around 18 months ago now.

We soon realised that we loved to write in all different styles, and people started sending us briefs for adverts, film etc that didn’t necessarily fit the Unsung Lilly style, so we decided to form our writing team ‘Golding & Young’ for that purpose.

MF: so since you put the band together, as Unsung Lilly, how has the build been both in terms of your audience and your syncs? And how many songs are in your catalog?

Sera Golding: We’ve just finished recording our debut album (called ‘BE’), which hasn’t been released officially yet (just on our website for UK fans), but we’re currently seeking investment to release and promote it next year on a bigger scale. We’ve been told the songs lend themselves very well to syncs, especially songs like ‘Happy‘ (which is a very uplifting, happy vibe) and ‘Just Be‘ (all about ‘being yourself’ and not succumbing to the media about the way you look). In terms of audience, we’ve had a fantastic reaction, mostly from YouTube (and facebook/twitter etc), and have been steadily building up an audience from around the globe, which is exciting (we’re on around 336,000 views on our youtube channel now)

MF: and how would you describe Unsung Lilly’s sound?

Sera Golding: Its very real, and very raw. We’re a big fan of older styles from back when things weren’t so over produced, so when we recorded we tried to keep things very vibey and almost ‘live’ sounding but obviously with more polish. We don’t tend to stick within a box when it comes to genre… so there are songs that are more poppy, and songs that are more soulful, or bluesy, but what ties it together and makes it sound like ‘Unsung Lilly’ is the two contrasting vocals, the beautiful harmonies, and the tasteful/laid back vibes from the boys.

MF: do you have anyone your are working with, whether a publisher, a label or a library/plugger that is helping you to connect your songs with music supervisors yet?

Sera Golding: Yes, we have a few great people on board! Justine Hamilton of Hamilton Productions is helping us as a co-manager, and helping a lot in this area. We’re also managed by UK company Bentlys Records. Additionally we have a distribution deal with GJ Tunes (Part of Allegro) and Rus Withers from GJ Tunes is also doing a fantastic job introducing us to people

MF: And tell us about the songwriting team of Golding and Young

Sera Golding: Well… as I mentioned, we soon realised we loved to write in all sorts of styles, and when we started working with people in the industry we started getting sent briefs, so we decided to form the writing team under a separate name. We have been writing for other artistes and to various briefs for TV, adverts, films etc, and have covered all sorts of styles – pop/dance/rock/soul/ballads etc. Our goals are to build some great relationships with people within the industry in the hope that they will come to us with their specifications.

We work very quickly and efficiently so can usually write and produce a demo within just a few hours. I know in this industry, quite often people want things done ‘now’ and we really can deliver that – so we’d like to get to know some people who we can build that sort of relationship with. Also we love writing for other artistes – so we’d love to get more of those opportunities too. Its lovely to get to know an artiste and write with them in mind.