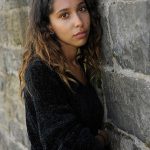 There’s a range of mood and style in the music. It’s contemporary, but it draws on tradition – from the Urban Folk of BODY, to the RnB Funk of LIGHTS, to the Country vibes of AS THE DUST SETTLES. You can hear influences in Geo’s music – Bowie, Velvets, Alicia Keys, Pink Floyd, Norah Jones – so many, but its subtle. She manages to define her own style and keep her originality alive.

The musicians on the album are tuned into Geo’s vibe – on Aurora, she is backed by Michele Montolli Upright Bass, Steve Marshall Guitar and Yusuf Ahmed Drums. The album was recorded at The Premises in Hackney with engineer Jonjo Keefe, and produced by John Saxon for State of Emergency Limited.