I want to wish every woman I know, that I’ve ever known, that I’ve ever met, and all the ones I have yet to meet or never will meet a wonderful, empowering day today – this and every day.

Every day should be International Women’s Day, and we men should make it our personal mission to celebrate and empower women every day.

Why do I say this?

Because, as a man, I’ve been incredibly fortunate to have been influenced, empowered and uplifted by so many wonderful women throughout my life, and I’m eternally grateful to them all.

And, I’ve seen the prejudice and bias so many women I know and care about had to overcome to reach their goals, maintain their positions and be treated with respect.

Whether a woman is flipping burgers or flipping businesses for a living, all my life, I’ve witnessed women putting up with the same stupid shit from us men.

This is to say nothing of the never-ending exploitation of women by men across the world as slave labor, sex slaves, indentured servants or things to use and abuse for their pleasure.

This stupid shit women have to put up with is our doing as men.  And, as men, we have to stop doing it.

And, to slightly amend the words of NARAS President and CEO Neil Portnow, we men need to step up.

And there’s no better time than International Women’s Day to start.

This is especially so in an industry that needs all the impassioned, talented and hardworking people it can get, and any man that stymies the hopes, hard work, progress and careers of women is a man that renders himself superfluous.  We can and must be better.

Now, allow me to share some hard data that brings into stark relief an institutional policy of misogyny – a policy that must be changed if only for professional reasons. 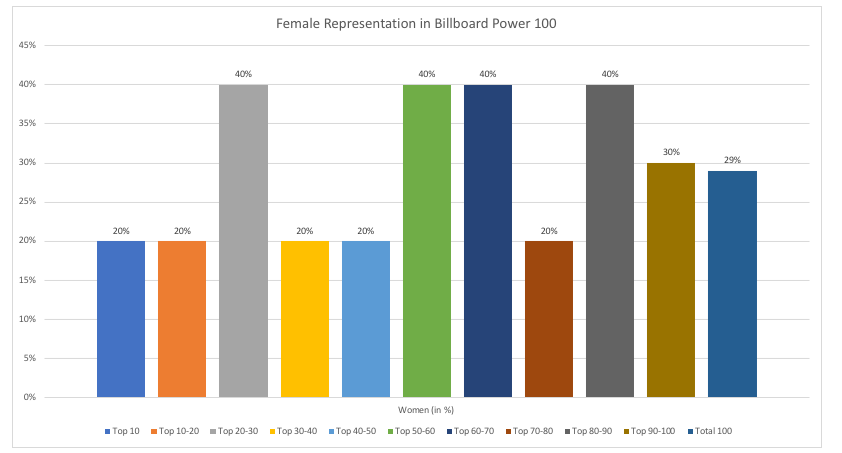 Of all the Billboard Power 100, a compendium of the most powerful people in music, 29% are female.

And, while that’s a far better ratio than the number of women in the US Congress (19.8%) or female billionaires (11.3% – Wealth-X Billionaire census), only four of the top twenty are female.  There’s definitely room for improvement here.

Still, this chart paints a much more positive picture of the role of women in the music industry than some of the other stats I’ve found. Here’s the rest.

In the past 60 years of the Grammys:

These numbers and percentages are out of all sense and proportion. Either that, or men are far better at making Grammy-nomination/winning music than women, and I do not believe that for a second.

The reason for these appalling figures is simple – most of the people doing the nomination are men, and they have a male bias when it comes to the music they like best.

I challenge you to provide me with a better explanation.

And it doesn’t get any better when you break things down to categories. 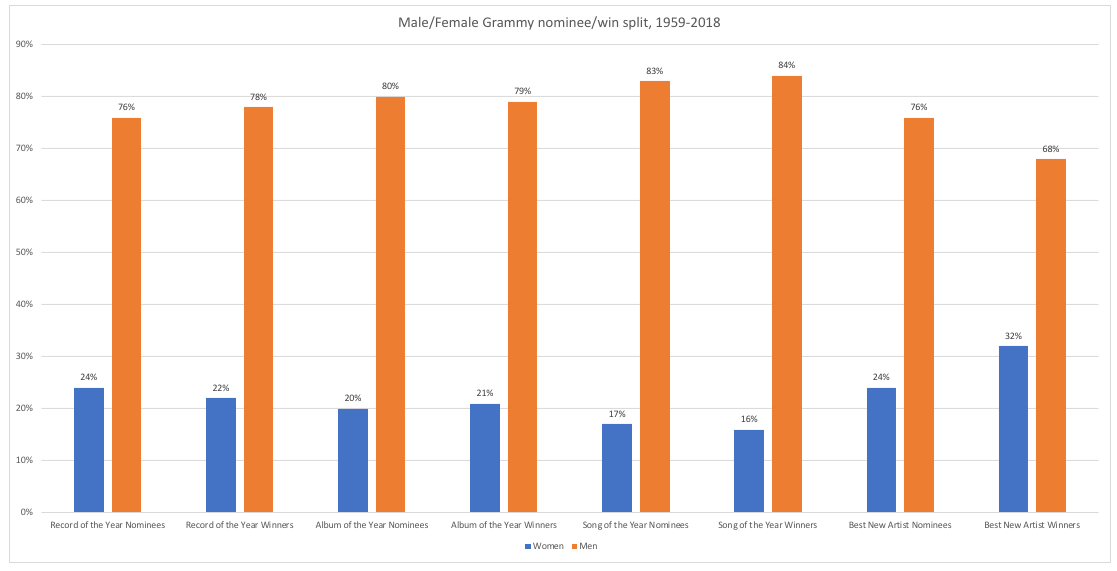 So, check this out – pretty damningly consistent, huh?

Well, based on this, men sure are award-worthy, aren’t they?  Truly, there’s something wrong with the nomination process and it needs to be overhauled.

And if you think these results are skewed by the fact they are over a 60-year arc, let us isolate the nominees for the years 2013-2017 and see how much things have improved (or not): 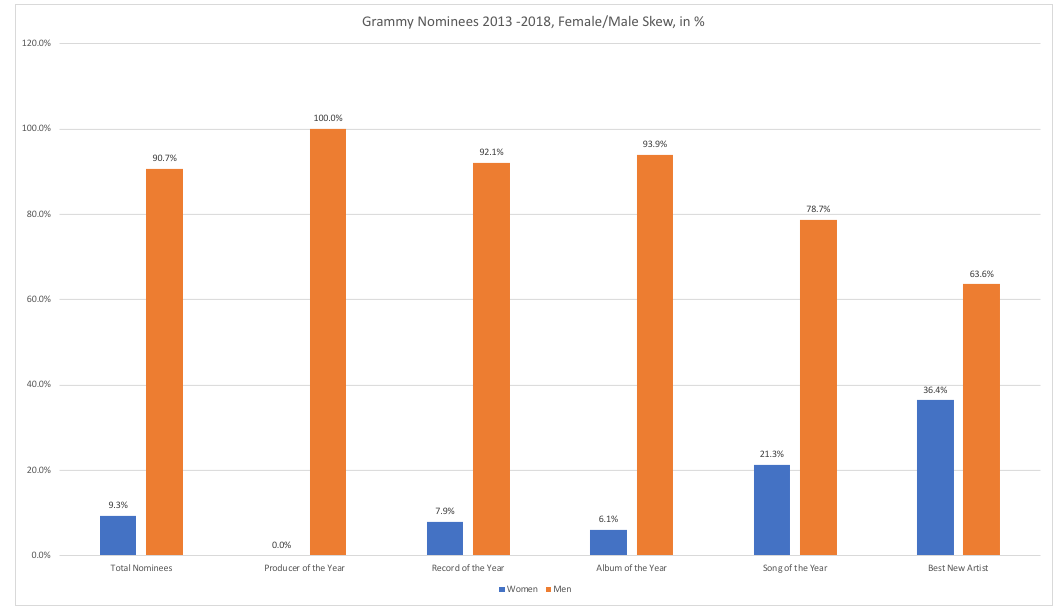 Umm… Not a single woman nominated as Producer of the Year? Seriously? For six years?

With the exception of Best New Artist, things have only gotten worse – probably because the poll of nominators has gotten older and more ossified in their thinking.  To wit:

But enough Grammy-shaming, let’s look at some stats covering different sectors of the industry.

How about a few stats from the excellent “Inclusion in the Recording Studio?” study prepared by the Annenberg Inclusion Initiative. 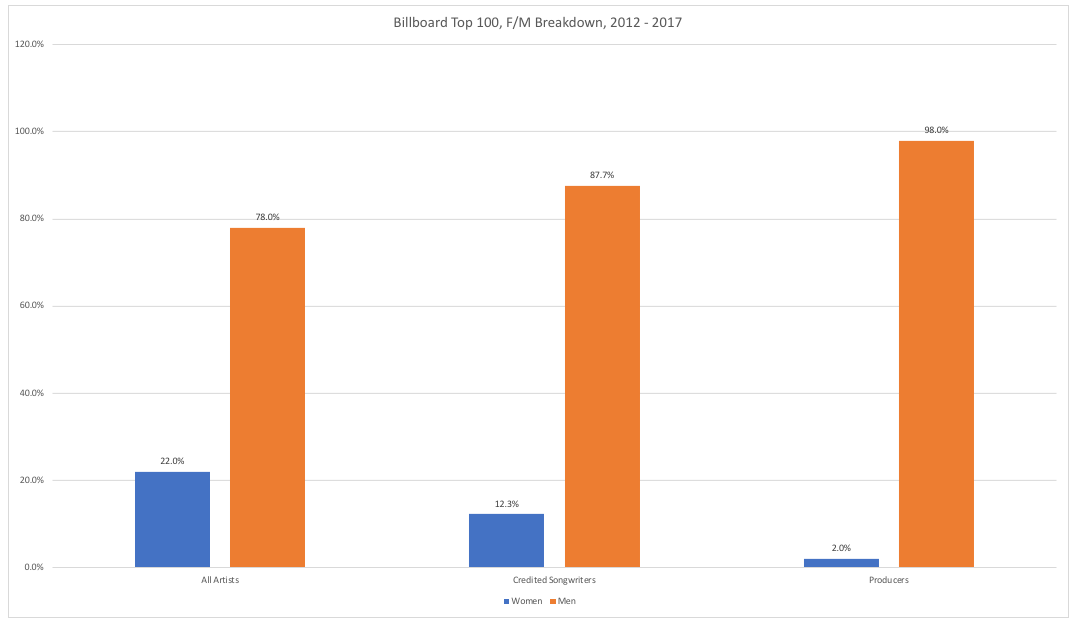 This just does not make sense to me – I personally know more female songwriters and producers that have been involved in creating Billboard Top 100 songs than these figures state.

So, what is going on?

In my mind, it is the music industry version of that cliché where the male boss’ female assistant is doing just as much or more of the work and getting less or none of the credit.

This needs to stop.  And we men can do our part by stepping up and making sure we empower and recognize women from the stage to the score to the studio.

Finally, as was pointed out to me by my friend Karen Rappaport McHugh at Rebelle Road – an organization she started to tackle inequity in country/roots music, things are pretty messed up when it comes to women and male/female acts versus all-male acts getting booked at live venues and festivals.

All told, there were 8935 artists that I pulled from their data for the chart below.  If you want to see the entire breakdown, and their article, go here: http://data.huffingtonpost.com/music-festivals

For the purposes of this article, I based the following chart on their raw data (click to enlarge):

Wow. Over 9800 acts booked, and only 105 were all-female groups?  How can this even be possible when 51% of all festival attendees are women and there’s a good deal more than 105 all-female groups with solid followings?

The bigger question we men have to ask ourselves is how in good conscience we perpetuate a situation where almost every aspect of the music industry is so skewed towards men, and how and what we can do to empower, uplift and assist women in the music industry to establish a more equitable, fairer industry.

As someone who’s always believed in gender equality, I see International Women’s Day as a call to action to find ways to be an agent of positive change.  For my part, I’m personally going to redouble SyncSummit’s efforts to feature more women as panelists and keynotes at our events, to highlight the unique issues women face in the music industry and to help through our forum to create a fairer and more equitable industry.

Of course, we’re partnering with Women in Music again this year to hold the 2018 Women In Sync Awards. More on that soon.

Also, with our partner Epic Music LA, we’re going all out to highlight and prominently feature women in sports music at the 2018 Sports Music Awards in December.

Beyond this, we’ll work to promote more female artists, music supervisors, producers and executives through our webinars, podcasts, blog and work with our partners like Music Matters in Singapore and Canadian Music Week in Toronto.

In short, I’m going to make sure my company does everything it can to empower women in the music industry.

And while I think what we all do on a micro-level (like the above) is important, we men in the music industry need to look at what we can do to be agents of positive change on a macro level.

I know that most of us really want to be good men, in our business and personal lives, and right now, part of that means we need to step up – both for the sake of the women in our lives and ourselves.